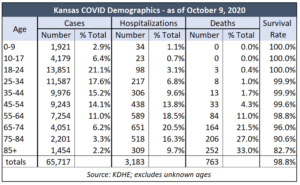 Governor Laura Kelly and KDHE Secretary Dr. Lee Norman should be providing comprehensive information that puts COVID in context but instead, they're fearmongering and manipulating data to scare Kansans into submission. They treat people like children who need to be told how to behave.

Last Friday, Norman told media that Kansas is 'losing the battle' on COVID-19 and he blamed residents for 'refusing' to consistently follow public health guidelines. He's simply focusing on the number of reported cases instead of the severity of those cases, while there's also a case to be made that the number of cases is artificially inflated.

Almost half of the deaths occurred in nursing homes This raises the question of why the impact was so acutely felt amongst the most vulnerable population and who is at fault. As the Kansas City Star's Michael Ryan wrote, a May 13 'guidance' memo from KDHE "sure appears to order nursing homes to admit patients regardless of their COVID-19 status."

That's not to minimize the tragedy of any death or to say COVID should be dismissed. The virus can be very serious (and deadly) for some people with compromised immune systems and other serious complications. Pneumonia can also be deadly, and according to the Centers for Disease Control, it has claimed the lives of 1,262 Kansans through October 2; that's 65% more than the 766 COVID deaths in Kansas reported by CDC this year, yet the state isn't taking any "new" or "emergency" action on pneumonia.

And what about the people dying not from COVID, but as a result of the draconian effects of closing schools or not allowing in-person learning?

As the Sentinel reported last week, a Blue Valley mom (called Stacey in the story to protect her identity) whose son tried to commit suicide said it's frustrating to see school board meetings where the board only cares about one thing — COVID cases, and not the other ripple effects of isolation.

The Blue Valley school district alone has lost at least two students and a principal to suicide since the lockdowns last spring. The day Stacey was in the emergency room with her son, there were three other children there who had attempted suicide.

And then there's the economic devastation, with tens of thousands of Kansans out of work, the thousands of businesses struggling to survive, and some businesses already forced to close.

Yet Norman and the Kelly administration focus solely on raw case count and they're angry that taxpayers don't blindly do as government officials instruct.

This is the same administration that won't say whether the COVID tests imported from China are FDA-approved…that rejected a legislative request for information about Personal Protective Equipment (PPE) after concerns were raised about nursing homes getting what they need from the state…that repeatedly gives out misleading information to scare people…and that insists its mask mandate 'works' even though the counties that adopted the governor's mandate have higher case growth than the counties that rejected the mandate.

Now we know that many of the reported COVID cases may be false positives because the state lab and many private labs have cycle thresholds set so high that tests are detecting particles incapable of spreading the virus.

The New York Times in August reported that virologists say the COVID test cycle threshold – the number of times genetic material is amplified to find the virus – should be set at 35 or below to avoid false positives. Today, the Sentinel reported that Kansas has the cycle threshold set at 42.

Enough with the mandates, misleading claims, and scare tactics.

It's past time to let kids back in school fulltime for in-person learning and to remove arbitrary restrictions on worshipping, socializing, and economic activity.

This article was first published in The Sentinel.

Will Pope
How long should Kansas schools continue remote education?
Many Kansas students are taking their lessons online from home. But this is causing some parents to struggle with child care, and many wonder if the isolation from peers is more harmful than the risk of covid. Should schools stay remote to slow the s...
25 Hits
0 Replies
In Education
Posted on October 14, 2020