New citizens at a naturalization ceremony take the oath of allegiance to the United States. Photo by Joe Hermitt retrieved from http://www.civics.ks.gov/ 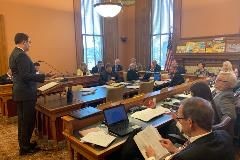 "I sometimes reflect on how much we demand of those who wish to become American citizens by their own choice," Schmidt said. "In many ways, it is more than we demand of those of us fortunate to have been born to citizenship. The nature of citizenship is not always fully understood or appreciated by those to whom it came without effort."

The bill under consideration, H.B. 2573, would require all students enrolled in Kansas accredited high schools to pass an examination on the principles of American civics before graduating. The exam would consist of 100 questions that are substantially similar to the questions administered by the federal government to applicants for U.S. citizenship through naturalization. The legislation is similar to a 2015 proposal by Schmidt to the Kansas State Board of Education that contributed to the creation of the Civic Advocacy Network, which recognizes Kansas schools that have exemplified civic engagement practices in their schools.

Only two in five (39%) Americans were able to name all three branches of government. More than one-fifth (22%) couldn't name a single branch. Only half (53%) knew that a two-thirds vote of Congress is required to override a presidential veto. One in five (21%) believed that if the president and the Supreme Court disagree on whether an action of the president is constitutional, Congress has the final responsibility for determining whether the act was constitutional.

Schmidt noted the national movement to require the passage of the naturalization test for graduation from public schools, citing a report by Education Week showing 19 states currently require a civics exam to graduate high school and seven more considered legislation to do so in 2019.

"We should combat the natural human tendency to take for granted that which comes easily – such as citizenship for those of us born to it," Schmidt concluded. "A ready way to do so is to hold us to the same standard for knowledge (or, viewed a different way, to give us the same opportunity) as those who choose to join our citizenry."

Will Pope
How long should Kansas schools continue remote education?
Many Kansas students are taking their lessons online from home. But this is causing some parents to struggle with child care, and many wonder if the isolation from peers is more harmful than the risk of covid. Should schools stay remote to slow the s...
79 Hits
0 Replies
In Education
Posted on October 14, 2020